This week Appirits, a Japanese web game developer has announced a new item collecting event for the turn-based web game Einherjar – The Viking’s Blood. From 30 January to 6 February 2013 (GMT+8) players are encouraged to join the event to get for themselves valuable in-game items. 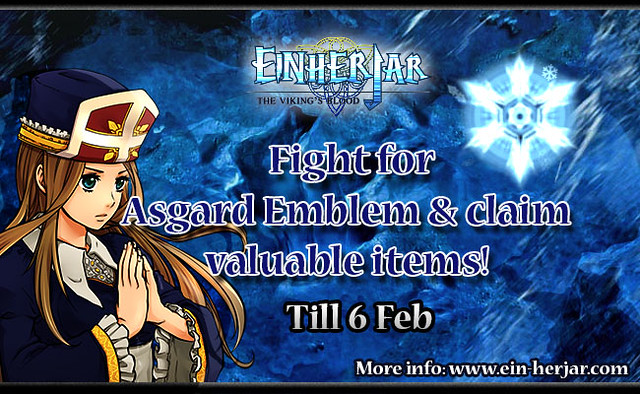 During the aforesaid period, a brand-new material called Asgard Emblem will be scattered at all maps in Einherjar. Players’ task is to prevail in harsh expeditionary battles to collect as many Asgard Emblems as they can. Then they can use them at the Event tab in the Production section for creating precious materials for their development of territory and army.

The developer hopes this event may bring more chances for players to earn a variety of items useful for their gaming progress in Einherjar.

About Einherjar: Einherjar – The Viking’s Blood is a browser-based game combining smooth turn-based tactic and RPG elements that let players start as Viking leaders and strengthen their Viking clans. Players must train their armies through numerous battles and master tactics for each type of map to subjugate their opponents and forge a vast Viking empire!

Appirits (formerly known as KBMJ) is a corporation specialized in developing Internet systems and services. Appirits has participated in the web game market since 2010 and is creating many new games with nearly 11 years of experience in the web industry.